Emma Maersk - Once largest container ship in the world

Do you know Emma Maersk, the largest container ship today, and an orchid were named after the late wife of Maersk’s chairman, Mærsk Mc-Kinney Møller?

You will find the answer later on in this article, together with information about:

Have you ever wished to name something big after the name of your beloved ones?

I believe the daughter of Mærsk Mc-Kinney Møller, Maersk’s chairman did, and she completed her wish.

She christened the biggest container ship on 12 August 2006 after her later mother, Emma Maersk. 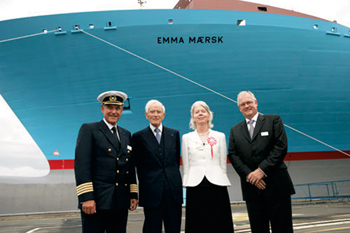 The extreme things like the longest river, the tallest skyscraper... usually impress people (including me). Emma Mærsk amazes us as the world’s largest container ship ever built, and the longest ship currently in use. (Actually, the biggest ship ever built, Knock Nevis – a supertanker, was scrapped in 2010). 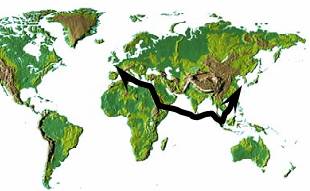 She departed Aarhus, calling at Gothenburg, Bremerhaven, Rotterdam, Algeciras, the Suez Canal, and arrived in Singapore on 1 October 2006.

The vessel departed Singapore in the following day, headed for Yantian in Shenzhen. She sailed on to Kobe, Nagoya, arrived at Yokohama on 10 October 2006, and returned via Shenzhen, Hong Kong, Tanjung Pelepas, the Suez Canal, Felixstowe, Rotterdam, Bremerhaven, Gothenburg and finally to Aarhus, with arrival at that port 11 November 2006.

Watch BBC’s interview with Captain Henrik Solmer about his experience on the biggest container ship.

Emma Mærsk is the first of eight PS-class container vessels. Though they all have the same design and, of course, dimensions, we usually tend to remember only the first as the largest.

On their website, Maersk Lines provides a very impressive and interesting illustration about a PS-class vessel like Emma Maersk:

Shipping world honors the Chairman and his wife

In the history of A.P. Maersk Group, before the giant container ship was built there had been up to 8 other vessels once having the name of Mr. Chairman’s wife, Emma Mærsk (she must have been very happy about that!). Those have been renamed or scraped. Therefore, Emma Maersk now widely reminds us of a beautiful huge container ship.

Back to Container Ships

What do you think about Emma Maersk?

Have you ever seen any container ship that's big and beautiful like Emma Maersk? Or you're so lucky to see the ship yourself? Share your thinking, feeling here...

What Other Visitors Have Said

Click below to see contributions from other visitors to this page...

I saw the ship myself

I saw Emma Maersk in the night while transiting from Malacca strait. It looked like whole island passing by. It was great to look at the world's largest …

I downloaded an ABC app for him and it has ship 201 under container ship. The app shows a YouTube video for each word, and this one shows how Jensen (foreman) …

According to Nespas, the sea distance from Hong Kong, China to Los Angeles is 6,379 nautical miles. So at average speed of, say 22 knots, it takes the …

This is the first of its kind - Amazing Not rated yet
My name is William, born around the early eighties. I have an 8 years old daughter by the name Juliet. I stay in a city called Gaoborone from a small …

Very exciting. Not rated yet
I want to work in Emma Maersk Sealand. It's my a im.

THE SHIP I WANNA WORK Not rated yet
This is the ship I wanted to work for. Specially, her powerful engine. The most powerful engine in the world and it is also the largest. In the speed of …

I've seen her (from a distance) Not rated yet
I live on the east coast of Kent so I often have the opportunity to take my binoculars down to the cliffs by Dover overlooking the English Channel. …

What's the fuel consumption rate? Not rated yet
OK, the Emma Maersk has the 109,000 horse diesel and can do 27mph (land speed) on a good day. So, how much diesel does it burn per mile? Or, how many litres …

I did'nt see it my self. Not rated yet
Honestly I didn't see the ship with my own naked eyes. I only read its news on internet watch its pictures, by doing the ship company play it roles in …

Interesting to know Not rated yet
This is an interesting for me to know about the EMMA. I have not seen it yet but i am very amazed after reading about it............... Great....

I Sailed on the sister ship Not rated yet
It takes 6 nm, from 25 knots (maximum speed, and semi loaded) to full stop. And this is with engine doing full astern (75% of max astern). The E-Class …

Stopping distance from 31 knots to zero? Not rated yet
Hi, Do you know how long does it take Emma Maersk to come to a dead stop from a speed of 31 knots? Menu for the crew? Food service 24 hrs? …

I love this ship. Not rated yet
Please tell me how long does it take to the ship to sail from China to the US west coast. My mail is disafi43@hotmail.com