A maritime container terminal is a place where containers arriving by ocean vessels are transferred to inland carriers, such as trucks, trains, or canal barges and vice verse.

Generally, a terminal is a facility where cargo containers are transshipped between different transport vehicles, for onward transportation. 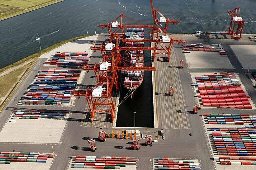 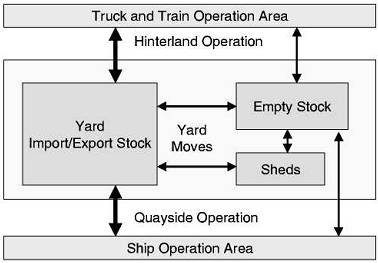 Operation areas of a container terminal and flow of transports

When a ship arrives at the port, the containers have to be taken off the ship. This is done by manned Quay Cranes (QCs), which take the containers from the ship's hold and the deck.

Next, the QCs put the containers on vehicles, like automated guided vehicles (AGVs). After receiving a container, the AGV moves to the stack. This stack consists of a number of lanes where containers can be stored for a certain period. These lanes are served by, for example, automatically controlled Automated Stacking Cranes (ASCs).

When an AGV arrives at a lane, the ASC takes the container off the AGV and stores it in the stack. After a certain period the containers are retrieved from the stack by the ASCs and transported by the AGVs to transportation modes such as barges, deep-sea ships, trucks or trains.

This process is also be executed in reverse order, to load containers on a ship.

For a clear idea of loading and unloading container ships at terminals,watch these videos

It’s pretty interesting to note that among top 20 container ports in 2009 in the table below, 14 are in Asia and China alone has 8 representatives.


>>>> Read brief introduction about these ports

The above rankings reflex the development of Asian (especially Chinese) economy and the improvement of port industry in the region. Things were different some twenty years ago when more than half of the top 20 were in America or Europe. See how's different?

Among hundreds of container terminals throughout the world, Singapore is the busiest, as of 2009. In fact, Singapore has taken over the port crown from Hong Kong since 2005, and kept the position for years.

Yet, according to some sources, in the first 9 months of 2010, Shanghai surpassed Singapore in container throughput and may become the winner for the first time in 2010.