Oasis of the Seas
The Largest Cruise Ship

Oasis of the Seas is currently the largest cruise ship in the world.

The giant ship was built in the shipyard of STX Europe (formerly Aker Yards), in Turku, Finland, and is now serving in the Caribbean region.

She set a record price of some USD1.4 billion and became the most expensive cruise ship. Besises set a new record of carrying over 6,000 passengers (three times as much as Tinatic) and 2,165 crew

Her sister ship Allure of the Seas are expected to be delivered in December 2010. 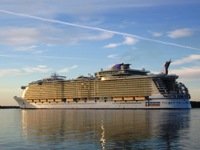 The website oasisoftheseas.com provides us with many fun facts about this beautiful giant cruise ship.

Return from Oasis of the Seas to World Largest Ships

Back to Home Page