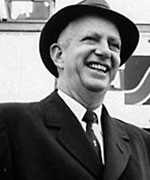 Growing up in a farming family in Great Depression period, he only finished high school level. In 1931, pumping gas at a station near his hometown helped him save enough money to buy a secondhand pickup truck for $120. Understanding the value of work hard and determination, he soon developed his truck fleet to five trucks and more, and finally 1,776 trucks by the early 1950s.

In 1937, while waiting hours for his truck to be unloaded at Hoboken, New Jersey, McLean came across the idea that not only changed his destiny but also the entire shipping world: the notion of “containerization”. He recalled, “I had to wait most of the day to deliver the bales, sitting there in my truck, watching stevedores load other cargo. It struck me that I was looking at a lot of wasted time and money. I watched them take each crate off the truck and slip it into a sling, which would then lift the crate into the hold of the ship.”

1937: McLean conceives the idea about container, while waiting for his truck to be loaded in New Jersey